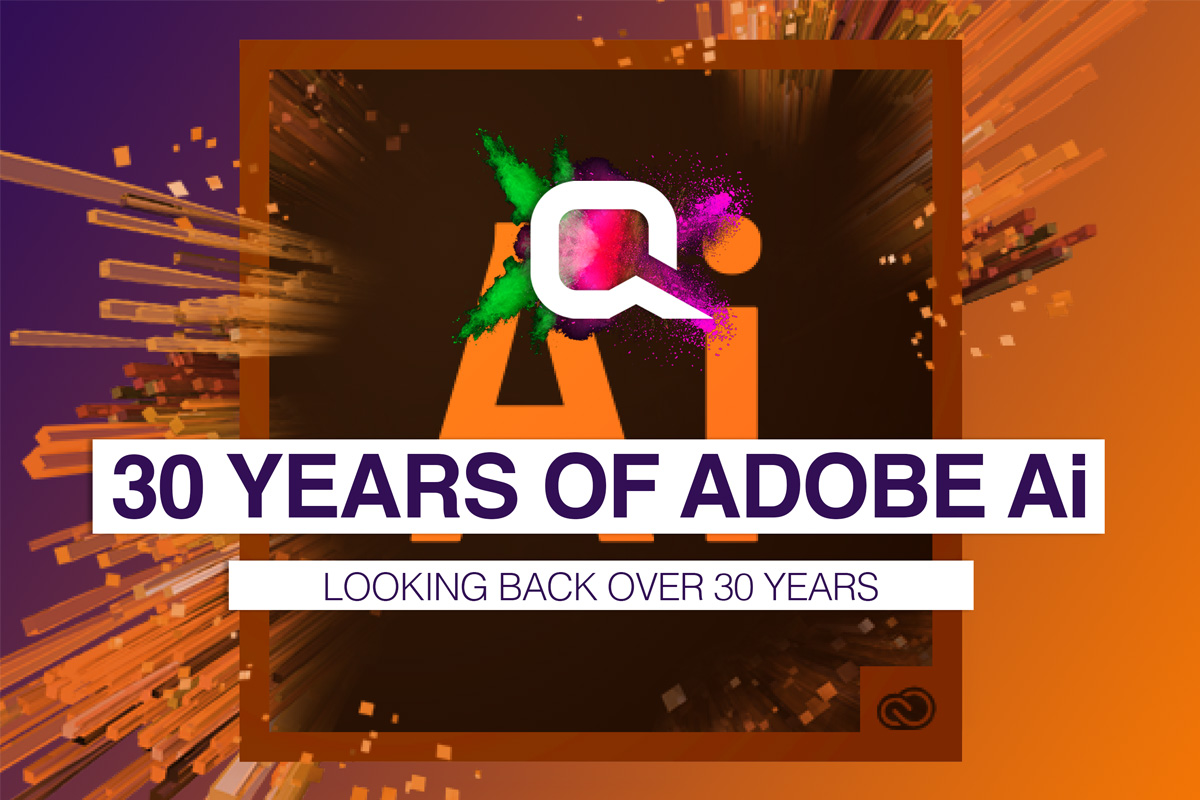 Adobe Illustrator – Looking Back Over 30 Years

Looking Back At The Go-To Graphics Software

Once upon a time, being a graphic designer was way more of an uphill battle than it is now.
Beyond the day to day challenges, arbitrary requests and ambiguous revision directions, having control of how you translated your ideas was chock full of challenges far beyond those found today.

We’ve seen a lot of technological advances and missteps over the many years at QPS Print. It’s with these (perhaps) rose-tinted spectacles that, in this post, I reminisce about a software that has been with us for many a panicked last-minute deadline: Adobe Illustrator.

Adobe Illustrator has become the staple of graphics creation for three decades and for good reason. Adobe Illustrator has evolved in this time to offer nearly limitless options for expression to artists and designers all around the globe. Becoming the premiere desktop editing software didn’t happen overnight, like every new design, it came with blood, sweat, and tears.

With the program’s 30th anniversary in 2017, perhaps this stroll down memory lane into the growth and origins of this game-changing software is in order. 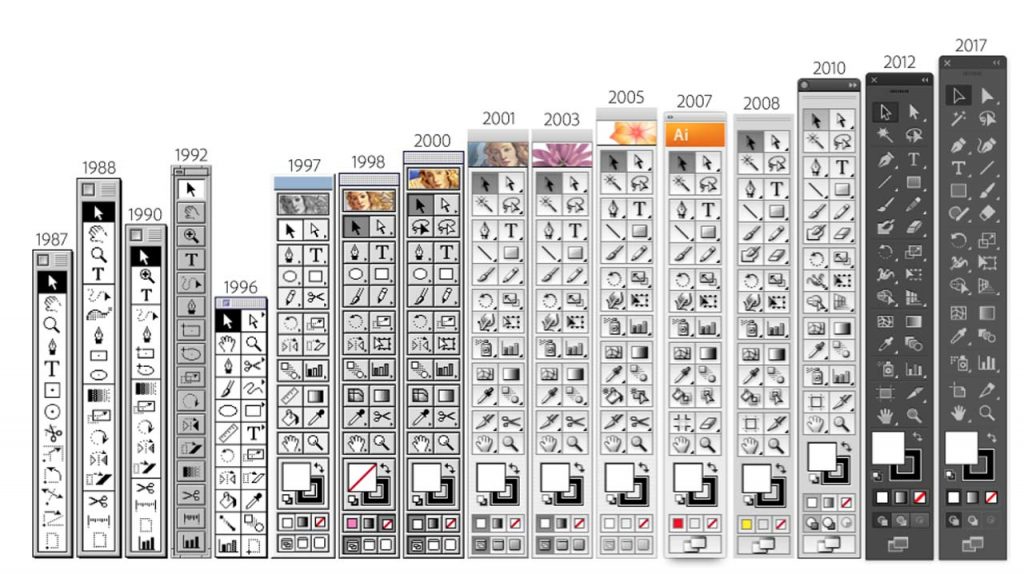 In the beginning, there was darkness. Professional graphic designers slaved over hot notebooks, hand drawing every graphic that would go on to become company logos or magazine covers. The process was labour intensive, time-consuming and above all, a real pain in the behind. From the sketching to the measurements to the manual inking, every step was a real arduous process to produce.

All it took was one flick of the wrist during the final inking stages and days of work could be ruined with one misconstrued line. You, the artist, would have to start part, if not all, of the process again. It makes choosing the wrong filter or waiting for a lagging computer seems like a stroll in the park.

Digital illustration was to graphic design what the sniper rifle is to soldiers in warfare. It was powerful, interesting, perhaps expensive, and required oodles of dedication to get the hang of. When digital illustration became introduced to graphic designers, everyone was sceptical of the software’s ability’s to match the precision and attention to detail of the artist’s hands. The technology once mastered, only served to enhance artistic abilities with the added benefits of saving huge amounts of time and effort. 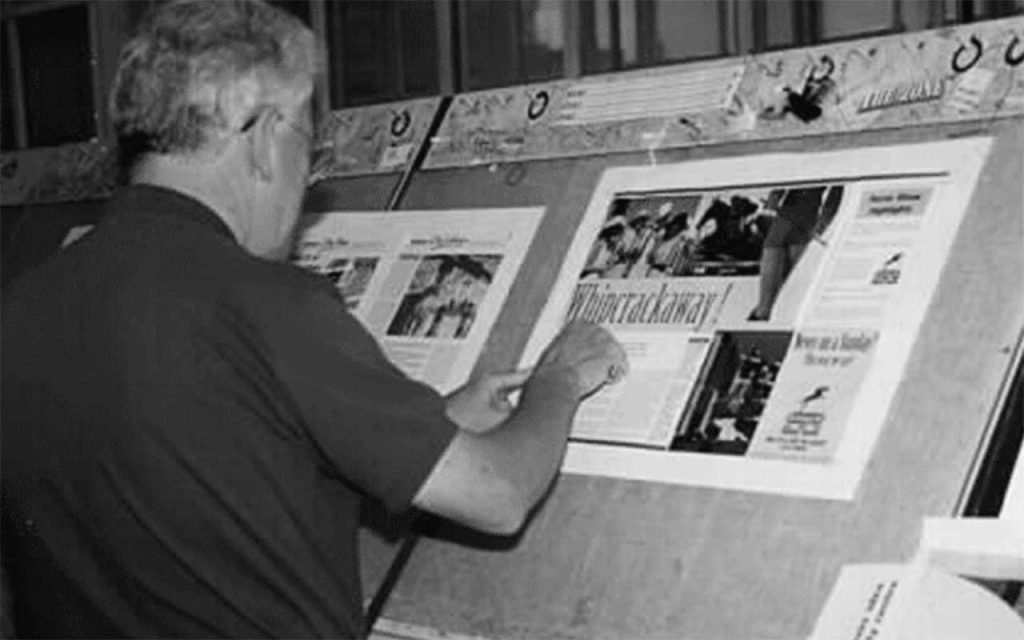 Programs like Adobe Illustrator gave tools to designers that could create auto-shapes, simple size corrections and of course, the joys of instant printing.
Once they realised it wasn’t quite all witchcraft and mumbo-jumbo, graphic designers couldn’t contemplate ever going back to the times before this new software.

Finally, no more redrawing the same exact thing over and over for days on end just for the purpose of attempting to change one tiny detail because the client didn’t agree. Every time an artist had to make an adjustment, it was only a one time deal instead of a thousand revisions.

Every idea offered by the graphic designer was met with applause and instant approval. Ok, not really, but it’s nice to dream!

Adobe Illustrator 88 Version 1-1.6: “All your curves and edges, all your perfect imperfections…”

Enter the Adobe Illustrator 88 for Apple Macintosh. The first introduction in 1985 and official release in 1987, Illustrator initially announced its arrival by showcasing innovations in producing curved lines and shapes through the use of the Pen tool. Designed as a design, logo and font app, the secret sauce lay in using these tools to create vector graphics — a way to draw objects using points, lines, curves and shapes. 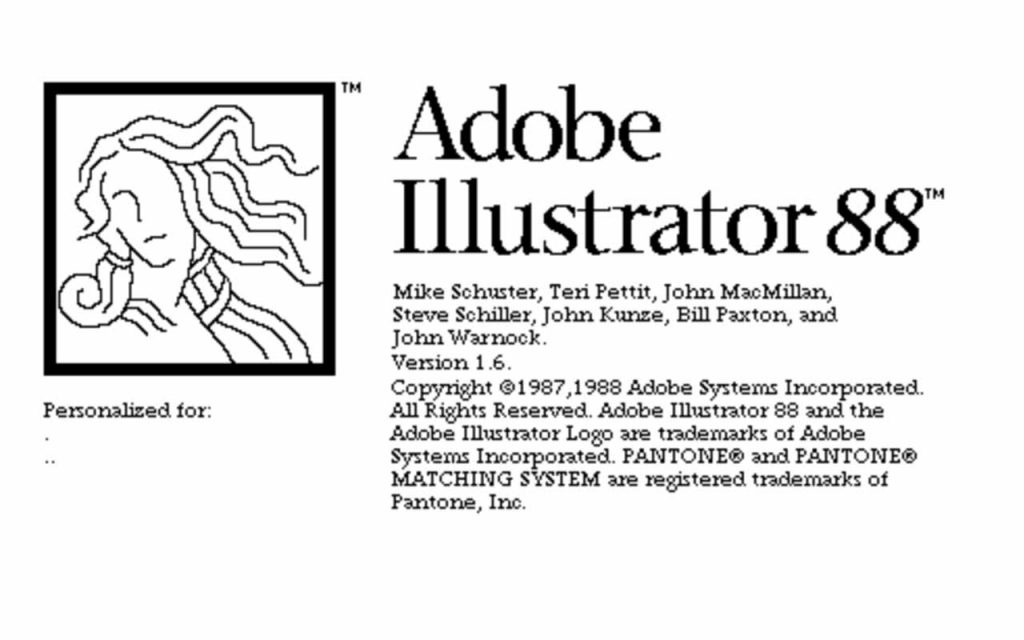 Known as Bezier Curves, for the layman it meant having the ability to create perfect curves that can be scaled up whilst keeping it uniform, precise and accurate. You could have angles and slants included effortlessly into any graphics project and sized to suit.

To reiterate its artistic sensibilities, Adobe recreated Sandro Botticelli’s ‘The Birth of Venus’ to use as the logo for Illustrator. With its flowing lines and skilled penmanship, it was an apt image to show off just what its new software program could produce.
This logo would be updated and changed with every new iteration of Illustrator to further demonstrate the technical progress of the program over time. 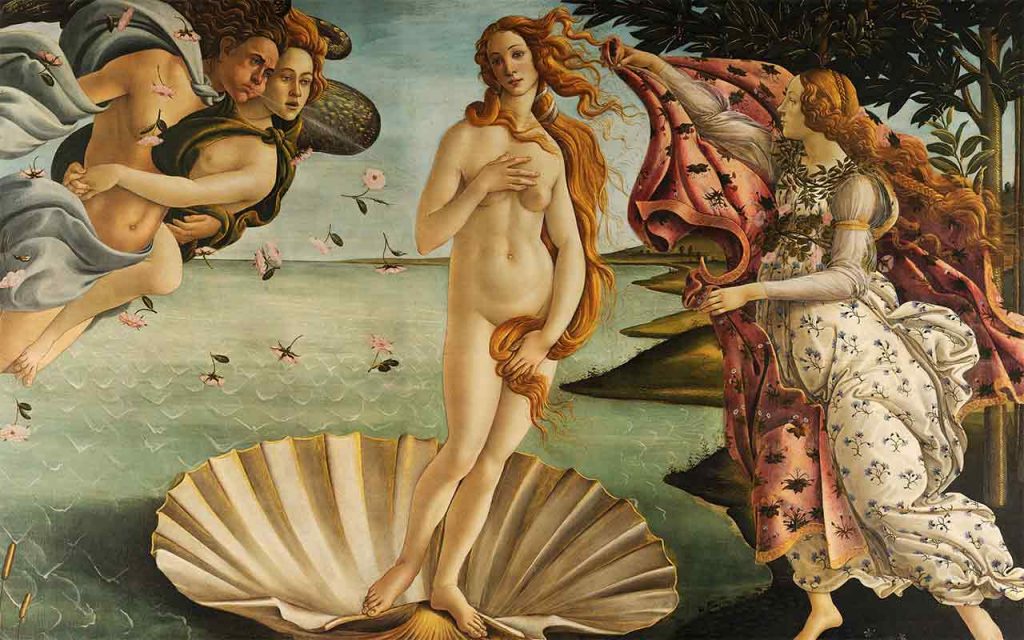 Botticelli’s The Birth of Venus

While Adobe certainly wasn’t the first company to pursue digital graphic design, they were one of only a few really pushing the boundaries of the technology. AutoCAD and CorelDraw also offered similar capabilities to Illustrator but it was Adobe’s software that offered a (relatively) low learning curve coupled with accuracy and precision.

Adobe Illustrator Version 2-6: “For the times they are a-changing…

Just like anyone growing up in public, Adobe Illustrator’s early years heralded fashion changes, harsh realities and bumps in the road. Version 2 added support for Windows but expectations were not completely met. Adobe’s slipup disappointed many new PC converts.
At this time, CorelDraw was the program of choice on Windows. It was more limited in options to Illustrator but people knew what it could (and couldn’t do). When Illustrator walked into town, the new kid on the block was seen as the Emperor’s new clothes.

Versions for other systems came and went during these years. Unsurprisingly since we know where we are today with the limited OS choices, only Windows and Macintosh remained.

More updates and tweaks followed as version 3 became 4. Advances that the community was requesting were included and adapted as added in new, improving functionalities.
In 4.0, (5.0 for Mac), the ability to edit within preview mode finally dropped in. The pain of switching between panes to see what changes were being made was no longer an issue. 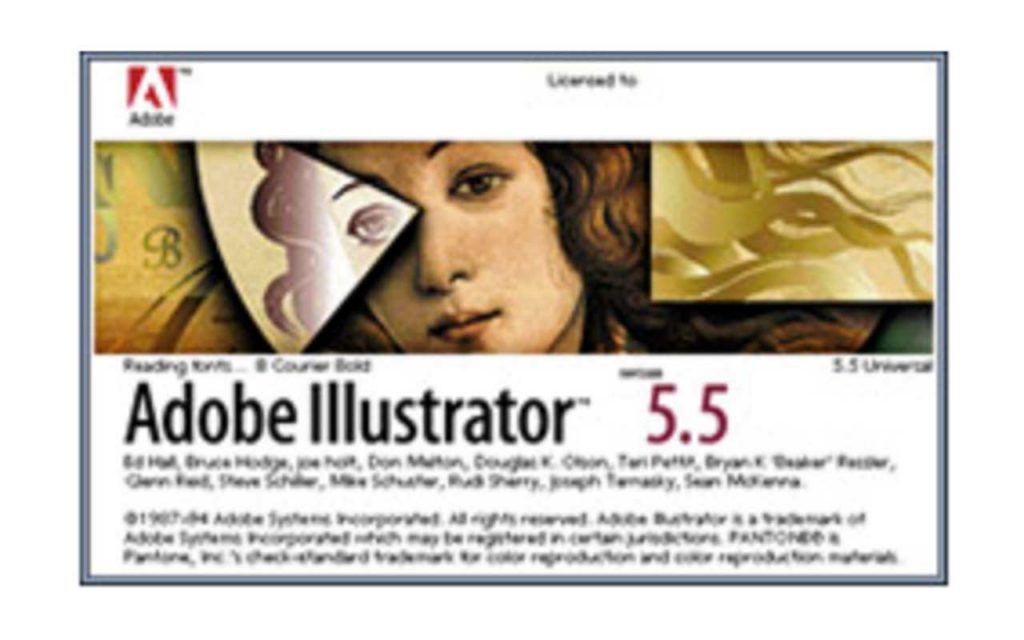 That fancy paint bucket tool? It landed here too.

As version 6.0 moved over to 7, Adobe brought together the development teams for Mac and Windows. With 6 in the rearview mirror, the program took on the same appearance across both platforms.

As Adobe’s photo editing software, Photoshop, began supporting external plug-ins and the world wide web gave easier access to them, so did Illustrator.
By the 1990s, the web had granted a much greater openness to third-party development. Thankfully Adobe gave permission for the artists and designers to use what was being developed from outside.
Adding even more versatile options to an already robust base, Adobe was able to keep relevant and grow in popularity and reputation amongst graphic designers. 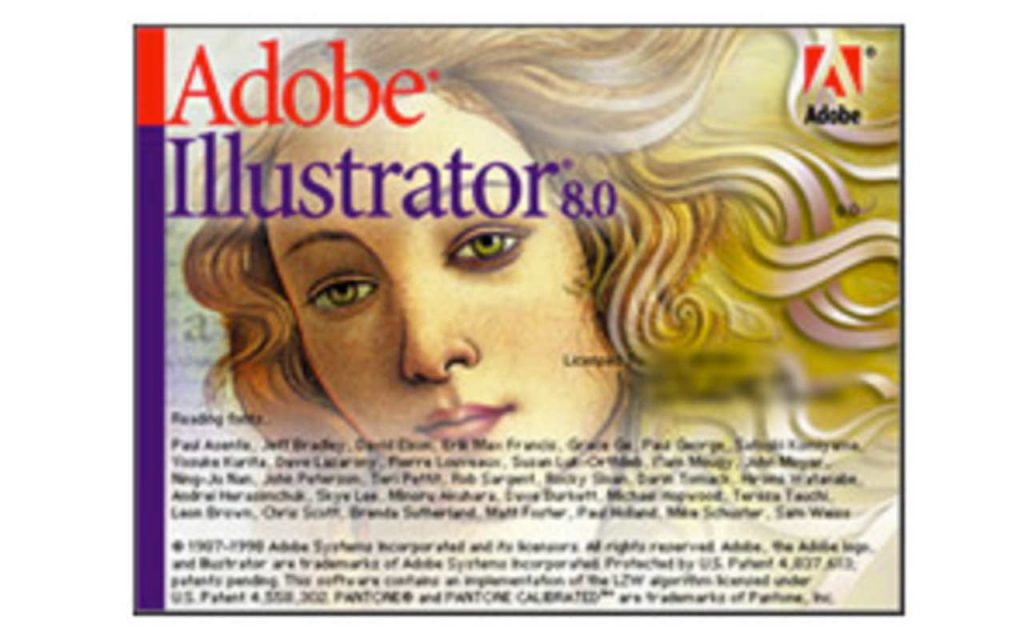 The late 90s and into the 2000s saw the rise of the dot-com bubble. In this dotcom world, website development became the number one priority. Content creation and image branding became possibly more important than the product itself.

This quickly became a great opportunity for entrepreneurial graphic designers. Online ads, logos, and web design all required graphic artists. Those artists required a flexible software solution and guess who was there for them?
Illustrator found its feet and home in many internet startups.

Adobe would be catapulted into the mainstream as it wholeheartedly adopted the online world and web publishing. Scalable vector graphics (SVG files), PDF creation, rasterization (converting vectors to images) all were included. With version 9, tracing tools that allowed the user to convert scanned images to artwork. Clever stuff.

By the early 2000s, Adobe had established itself as the bona fide leader in the vector graphics editor industry. To capitalise on this further, Adobe employed the Creative Suite product lines. With CS, all of their programs were bundled together in one package.

In this way, Adobe was giving more value to their customer base whilst also streamlining the system for future enhancements and updates. It always pays to plan.

Creative Suite 1 and 2 included Acrobat, After Effects, Audition, Bridge, Illustrator, Photoshop and Premiere Pro amongst others. The lines between graphics and content creation blurred into full-scale media development.
Adobe was there to cater for the new generation.

In 2007, CS3 brought in updates such as Live Colour, crop areas, Image Ready and Soundbooth which replaced Audition. The next update in 2008 introduced multiple artboards (brought across following Adobe’s purchase of Macromedia and Freehand) and the Blob brush toolset.

Multiple artboards allowed the user to work with different versions of the same artwork within the same document. The Blob brush allowed multiple overlapping vector brush strokes to easily merge or join within the project. Clever stuff!

As technology marched forwards so did the innovative updates. Adobe’s earlier versions were limited by advances in the available resources and imagination.
Now nothing could hold them back.

CS5 in 2010 added the Perspective Grid tool (another Freehand invention) that gave the designer three-dimensional viewing capabilities. The Bristle brush brought in more natural and painterly strokes.
Now Botticelli may have put down his horse-hair.

CS6 brought in an overhaul of the UI, layer panes and the usual performance fixes.
Adobe CS6 was also the last time the software could be bought in a box. 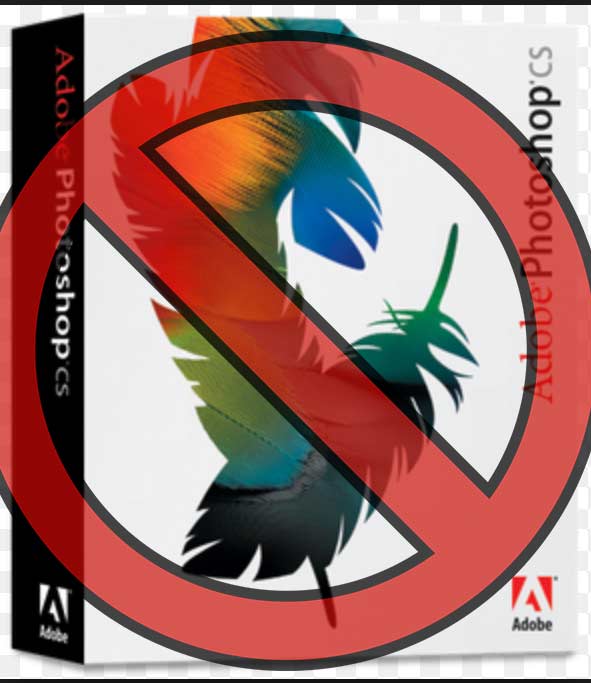 From a trickle that only allowed dinky plugins to be downloaded, the world wide web of a decade ago had developed into a tsunami of high-speed power.
The ability to grab gigabytes of information was here and Adobe decided to make a big switch.

Adobe Creative Cloud: “All the cool kids are doing it…”

In 2013, Adobe released the Creative Suite as the Creative Cloud. No more store bought physical discs and no more owning the item outright. Now, Illustrator had gone subscription.

With a monthly payment, the user had access to all the programs. Running in the background, Adobe’s cloud can update and sync every app instantly.
It upset a few people and still does, but this digital-only replacement has grown from strength to strength. The last figures supplied by Adobe in 2016 showed a million subscribers.

On top of accessing the applications seamlessly via the cloud, Adobe allotted each user dedicated space for storing work and projects.
Most bases were covered by Adobe having packages suited for different industries and apart from the usual online gremlins, the system pretty much just works. 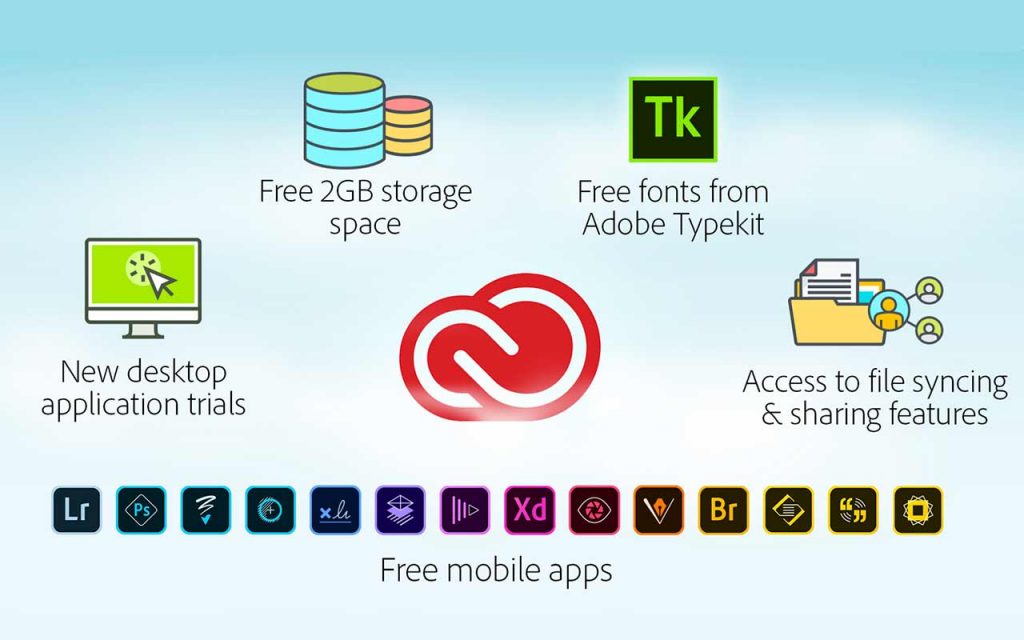 So, Illustrator with its 30 years of updates and developments, innovations and pitfalls has been there from the early days of the digital desktop. Looking back with an eye on where we are now, something tells me it will be just as relevant looking forward to the future.

In its inception, Adobe Illustrator 88 made the jobs of graphic designers simpler, faster and much more efficient. By the 1990s, Adobe had adapted to the changing landscape and standardised its software for easier use. By the 2000s and 2010s, its continued advances have made it the go-to program for the graphics editing market.

Adobe has always managed to stay ahead of the curve and the competition through innovation and well, sometimes just luck. I don’t expect too many changes to this reign or bumps in the road short term…
But then again, we are deep in the middle of another highly disruptive time.

With apps the price of pounds and bedroom coders putting out professional product, maybe, just maybe… 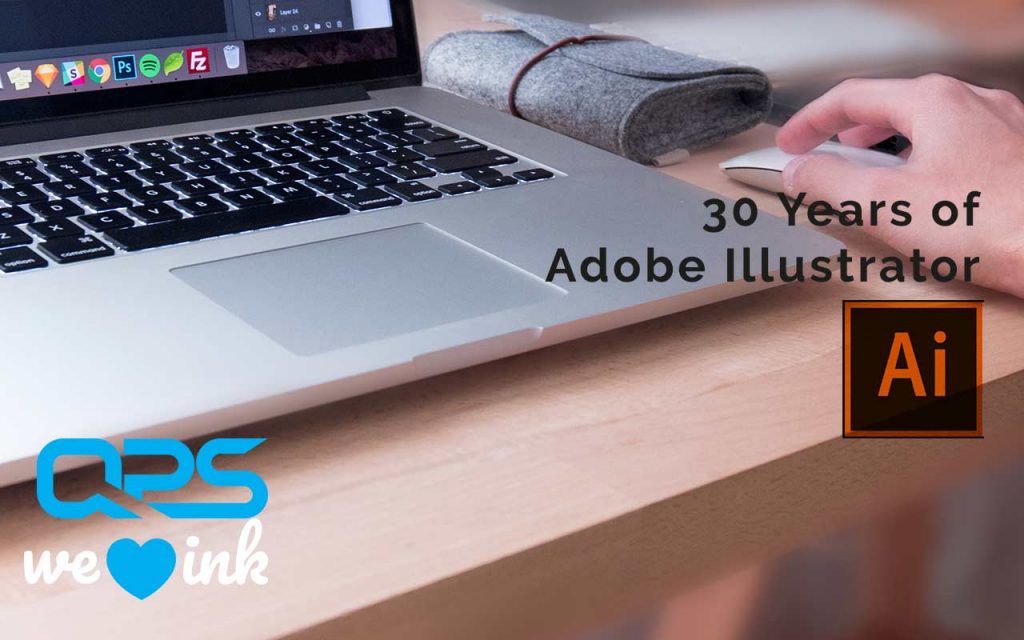 References for this article from Wikipedia and Vecteezy

What you can read next 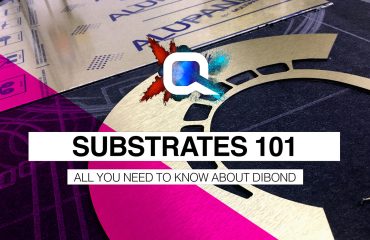 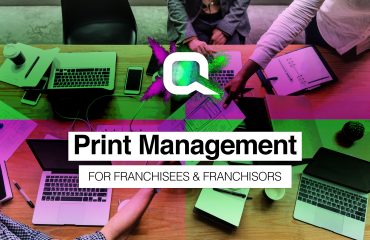 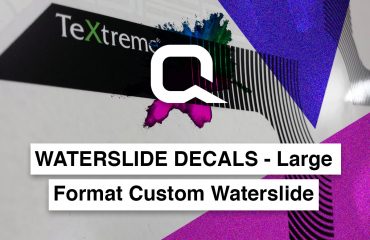